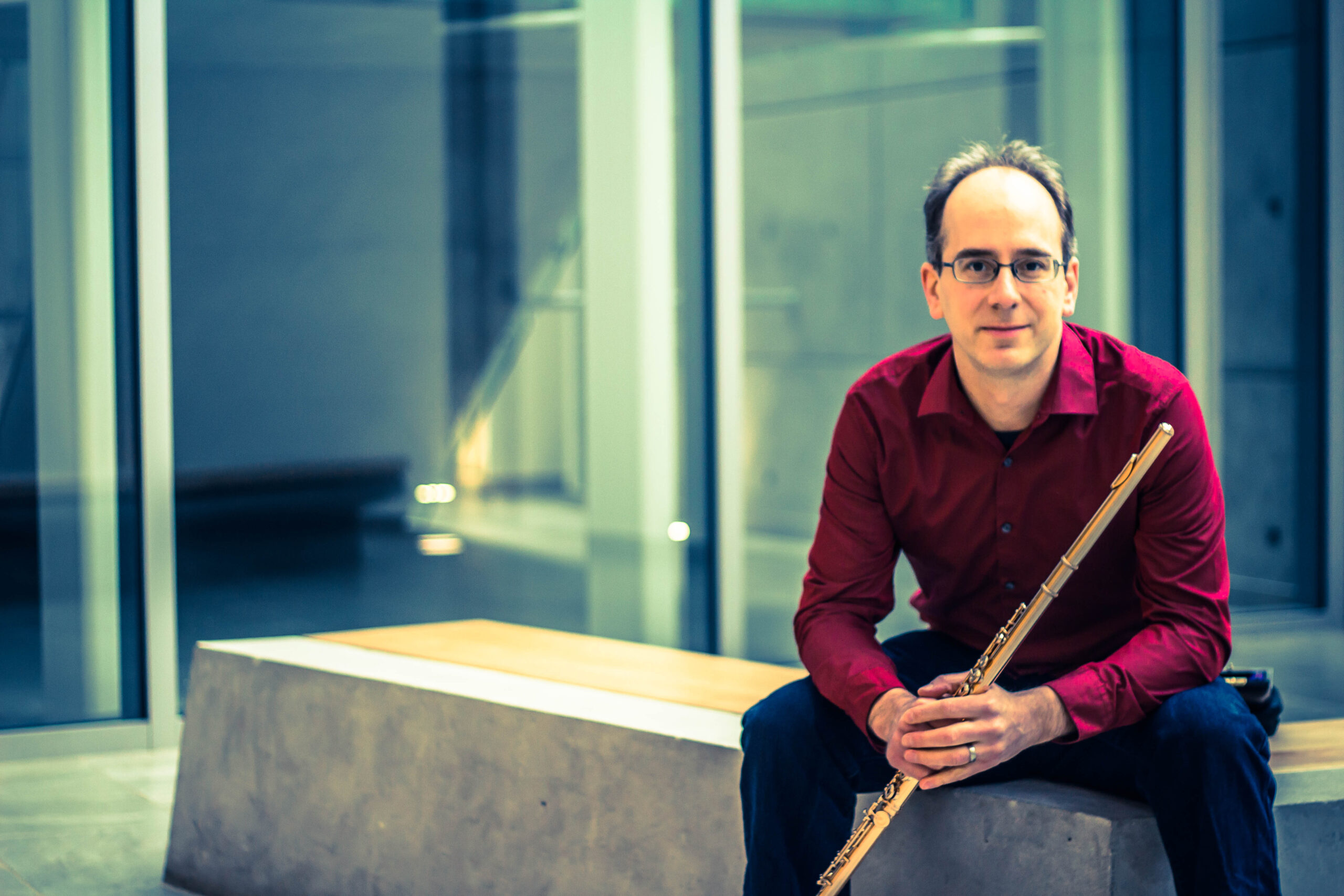 Turning Point Ensemble opens the 21/22 season and welcomes audiences back in the theatre with an energetic and lively program featuring Vancouver composers Jennifer Butler, Ramsey Sadaka and Edward Top. The concert also includes Zilver (Silver), a masterpiece of intricate development of a melody simultaneously moving slowly and quickly by one of the world’s leading contemporary composers, the late Louis Andriessen. Edward Top’s Magic includes child violinists, integrating the fragility and ‘magical’ innocence of simple melodies played by the young violinists with the full force of the ensemble engaged in sophisticated micro-canons à la Andriessen. Audiences will hear the premiere of a flute concerto, 차가운 (Chagaun)-The Book of Ice, composed for Paolo Bortolussi and TPE by emerging composer Ramsey Sadaka, and The tide rises, the tide falls by Jennifer Butler, a thoughtful work that explores stasis and change while referencing the music of one of Vancouver and Canada’s most influential 20th century composers, Barbara Pentland.

About Paolo Bortolussi
Flutist Paolo Bortolussi is a soloist, chamber artist, and new music pioneer. Dedicated to championing
music by living composers, he has premiered over 150 works for flute, including concerti written for
him by Dorothy Chang, Jocelyn Morlock, and Aaron Gervais. Paolo is co-artistic director of the Nu:BC
Collective, a new music ensemble in residence at the University of British Columbia. Firmly
established as one of the premier interpreters of contemporary music in Western Canada, Nu:BC has
performed at festivals across Canada, the US and Asia, and has premiered works by some of Canada’s
leading composers including Brian Cherney, Gabriel Dharmoo, Michael Oesterle, Chris Paul Harman,
Dorothy Chang, Owen Underhill, Aaron Gervais, John Oliver, Edward Top, Keith Hamel, and many
more. Beyond Shadows, Nu:BC’s debut CD, as well as Paolo’s recent solo release Israfel have received
multiple nominations at the Western Canadian Music Awards.

Raised in Halifax, Dr. Bortolussi is a graduate of the University of Ottawa and the Indiana University
School of Music. He serves on the faculties of the University of British Columbia, Kwantlen
Polytechnic University, and Trinity Western University, and has presented masterclasses across North
America as well as in Korea and Taiwan. Paolo is principal flutist of the Vancouver Island Symphony
where he is the driving force behind the Canadian Concerto Project, which has commissioned,
premiered, and recorded five new concerti by Canadian composers for principal players of the
orchestra.

About Edward Top
“Horror composer Edward Top acted as a kind of snake, hypnotizing listeners as frightened little bunnies” is what Dutch newspaper de Volkskrant wrote 25 years ago. As part of Vancouver’s kaleidoscopic music scene since 2010, Top’s music has been identified by The Vancouver Sun as “earthy neo-primitivism” and “a dreamlike expression of (…) the collective unconscious” by the Georgia Straight.

Top studied composition and violin at the Rotterdam Conservatory and, after working and traveling in the Far East for several years, continued studies at King’s College London. Edward has been Head of Composition at the Vancouver Academy of Music since 2014, and served as Composer-in-Residence with the Vancouver Symphony Orchestra working with conductors Bramwell Tovey and Otto Tausk. Holland Symfonia, Schoenberg Ensemble, Tokyo Sinfonietta, among others, performed his compositions, and the Toronto Symphony Orchestra recently premiered the commissioned work Eruption on tour in Ottawa, Montreal, and Toronto.

Statement from Edward Top on Magic
Magic is a hybrid composition for sinfonietta and child violinists, consisting of different styles cast in the repetitive texture of a dutch-minimalist microcanon. On the one hand the little violins are an extension of the ensemble’s orchestration: the delicacy of small-sized instruments, the fluctuating intonation, and the archaic simplicity of rhythm – yet played with the greatest effort! On the other hand, the fantastical idea of ‘magic’ from the perspective of the children’s fragility and innocence – yes, a childlike adoration of the magical – produces a psychological contrast with the full force of the highly cultivated sound of the sinfonietta.

About Jennifer Butler
Jennifer Butler is a composer, teacher, and flutist living in Vancouver, British Columbia. Her music, described as “beautifully remote” (Vancouver Sun), “intimate” (Globe and Mail), and “disquieting” (Vancouver Observer), has been commissioned, performed, and broadcast across Canada, in the United States, Australia, and Europe.

Jennifer teaches at the Vancouver Academy of Music, is a Teaching Artist with Vancouver Opera, and a composer mentor with the Turning Point Ensemble. She is currently the Chair for the advisory committee for the BC region of the CMC, and is an active board member for Redshift music and the Standing Wave Ensemble.

Statement from Jennifer Butler on The Tide Rises, The Tide Falls
This piece is a response to Barbara Pentland’s Tides, for violin, harp, and marimba. I began by extracting fragments that particularly spoke to me, creating a palette of “stolen” melodic fragments, textures, and colours. Then I asked myself “how should I use these fragments to make something new?”

In The Tide Rises, the Tide Falls I created a piece with five sections that are all shaped around exactly the same melody line. However, in each section I explore different colours, textures, timings, and densities. Each section sounds quite different, and yet, each section also sounds the same.

Ramsey Sadaka bio
Ramsey Sadaka is a Vancouver-based musician, as well as an executive board member and secretary for the Vancouver Pro Musica. His compositional practice filters literary inspirations to create music that is colourful, intimate, and finely-sculpted.

Sadaka’s music has been performed internationally at many prestigious new music festivals, including New Music on The Point, the highSCORE New Music Festival, and the Oregon Bach Festival Composers Symposium. He has worked with such musical luminaries as the Vancouver Symphony Orchestra, the Turning Point Ensemble, members of the JACK Quartet, the Nu:BC Collective, and soprano Estelí Gomez. His work has also been generously funded by institutions such as the Analysis, Creation, and Teaching of Orchestration Project, as well as the Johnstone Fund for New Music.

Sadaka is currently pursuing a doctorate in composition under the auspices of a Four-Year Fellowship at the University of British Columbia, where he has studied with Keith Hamel and Dorothy Chang, and serves as a teaching assistant for the university’s Contemporary Players ensemble.

Statement from Ramsey Sadaka on 차가운 (Chagaun)-The Book of Ice
My piece for flute solo and chamber orchestra, which takes inspiration from Han Kang’s novel, The White Book, is part of a series of works that explores unique ways of blending music and text within a delicate and colourful timbral palette. This piece is based on four texts that relate to different forms of ice: frost, snow, blizzard, and sleet. The flute soloist takes on the role of the narrator by evoking the novel’s wide range of emotional states using a variety of playing techniques, including air tones and spoken phonemes derived from fragments of the original Korean text.