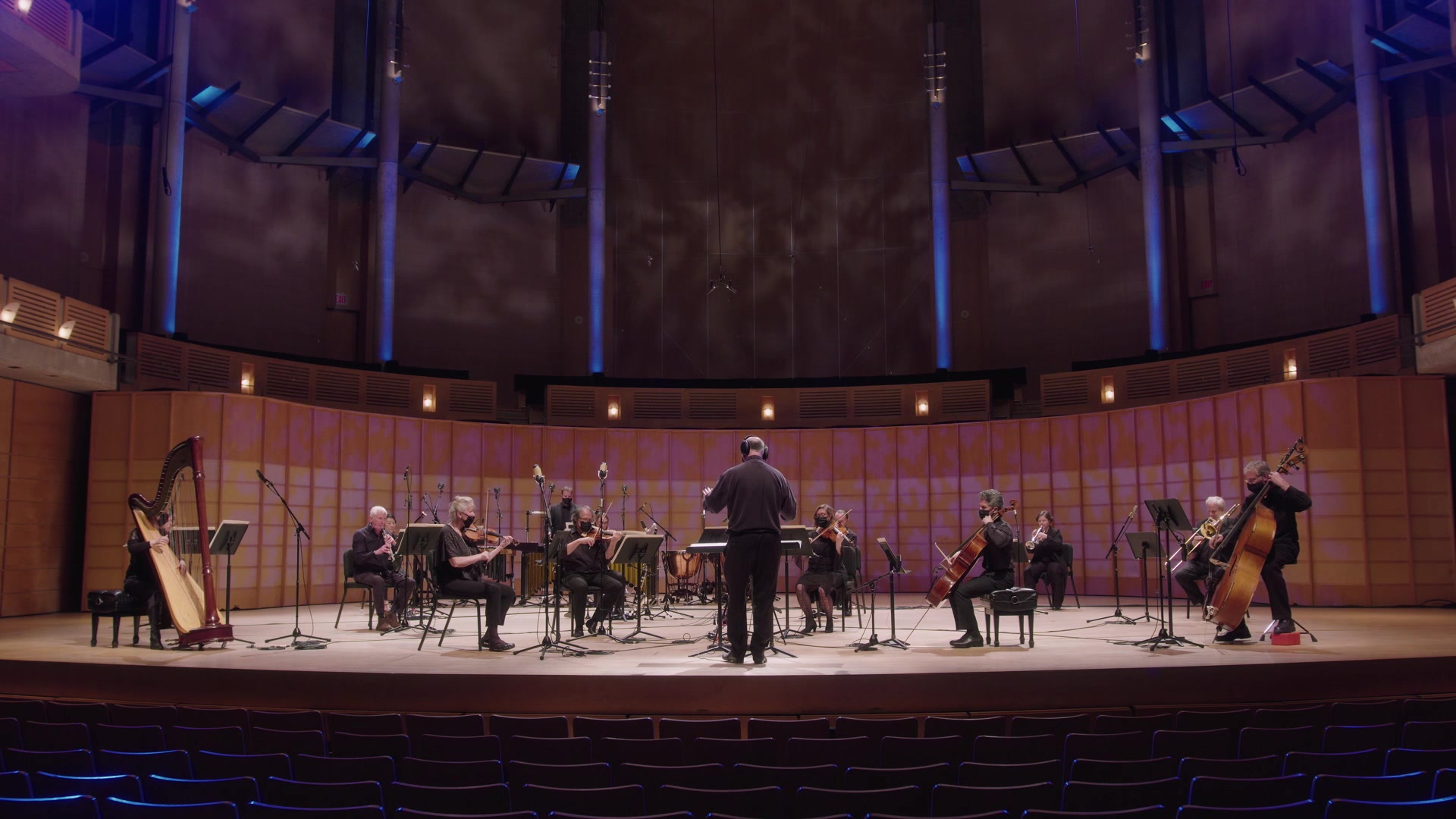 This concert was recorded by the Turning Point Ensemble in the Chan Shun Concert Hall at the University of British Columbia in April, 2021. This online concert features two interactive compositions for ensemble and live electronics by David Eagle Two Forms of Intuition (2011) for chamber orchestra and computer and Unremembered Tongues/ʌnɹɪmembəɹd tʌŋz (2013) for soprano, ensemble and computer, featuring soprano Robyn Driedger-Klassen. The concert will feature two compositions by Mauricio Pauly Clinamen clinamen clinamen (2008) for clarinet and string quartet and as well a new work We en flor de chiflón (2021) for mixed sextet (violin, cello, trumpet, harp, percussion, electronics).

The title comes from the philosopher Immanuel Kant who proposed that we always perceive the world as phenomena in time and space, and these he called our ‘two forms of intuition’. Music though is generally seen as a process that unfolds in time while the aspect of space is more static. In Two Forms of Intuition the movement of sound in space becomes part of the musical development. The piece evolves through a series of contrasting sections or soundscapes, each focusing on distinct textures – solo notes, lines, chord blocks, staccato, legato, groups, breath & noise sounds, arpeggios – while sharing underlying harmonic material.

The initial inspiration came from thinking about the many forgotten and endangered languages that are disappearing or are threatened in our time. The languages are Iwaidja and Kayardild from northern Australia, Blackfoot and Cree from Canada, as well as Hawaiian, Latin and Basque. They were chosen for their sonic qualities, the vowel shapes and sound of the phonemes, and also for the cultures and histories that they represent. With microphones and computer processing one can listen more closely to the live musical gesture and then follow its transformation, as it moves into a kind of dream state, at times very close, at other times reflected in the distance as if in the past.

“When atoms move straight down through the void by their own weight, they deflect a bit in space at an uncertain time and in uncertain places, just enough that you could say that their motion has changed. But if they were not in the habit of swerving, they would all fall straight down through the depths of the void, like drops of rain, and no collision would occur, nor would any blow be produced among the atoms. In that case, nature would never have produced anything.” Lucretious, De rerum natura.

Vaporwave happened with me mostly not noticing. I was distracted; its fumes flowed cleanly above my age grade. A generation younger than mine vicariously nostalgic for my generation’s nostalgias. But more important than the nostalgia is the deliberate capture, reframing and recontextualising (as elsewhere), from pattern recognition to mistranslation – the emergent loss a gain. This turning wheel is as warm as it is well worn. So minus the nostalgia, the strategy spread and adapted across all layers and stages: play a (harp), work with its recording and make a score for a performer to interpret the sculpted edit. Sample in real-time as they do so and, with a hopeful frown, orchestrate an interpretable future.

Alejandro Jodorowsky’s voice is earnestly rebuilt, under my spoiling ear, by a voice cloning neural network. In the source audio, Alejandro spoke in English with an accent (not dissimilar to mine), “I think to be alive is weir(d)!”. The network, however, like most, is trained in U.S.-ian. An impossible, unimaginable and unnatural capture of these two nodes battling in mid-air. Neither one nor the other, nor truly capable of articulating discrete language, there is something surprisingly tender about these resulting voices – speakers getting lost in expressive noise tangents or stuck tirelessly attempting to pronounce a diphthong – their mannerisms weaving sensations at the brink of comprehension.